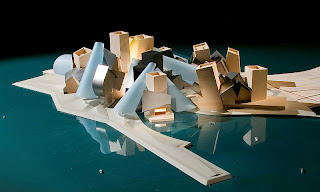 To be called the Guggenheim Abu Dhabi, the museum, designed by internationally-acclaimed architect Frank Gehry, will position the emirate as a leading international cultural destination, the report said.

Gehry is the architect of the celebrated Guggenheim Museum Bilbao, in Spain.

At 30,000 square metres, the Abu Dhabi museum will be the only Guggenheim museum in the region and will be larger than any existing Guggenheim worldwide.Construction is expected to take five years.

The museum will form its own major collection of contemporary art and will exhibit masterpieces from the Guggenheim Foundation's global collections.

The museum will be built in the Cultural District of Saadiyat Island, a natural island 500 metres offshore from the UAE capital, which is being transformed into an international tourism destination.

Thomas Krens, Director of the Guggenheim Foundation, said the signing reflects the visionary spirit and forward-looking approach that are the Guggenheim's hallmarks.

'The Guggenheim implicitly regards all contemporary cultures and their traditions as potential partners in the field of aesthetic discourse - we are both respectful of difference and excited by it,' he said.

'We also believe that the Middle East is one of the world's most important emerging regions in terms of contemporary culture,' he pointed out.

The Guggenheim Foundation will establish and manage the museum's programme, which will include collection development, exhibitions and educational initiatives.

Other Guggenheim museums are in New York, Venice, Bilbao, Berlin and Las Vegas.
Posted by Tyazizul at 2:16 AM